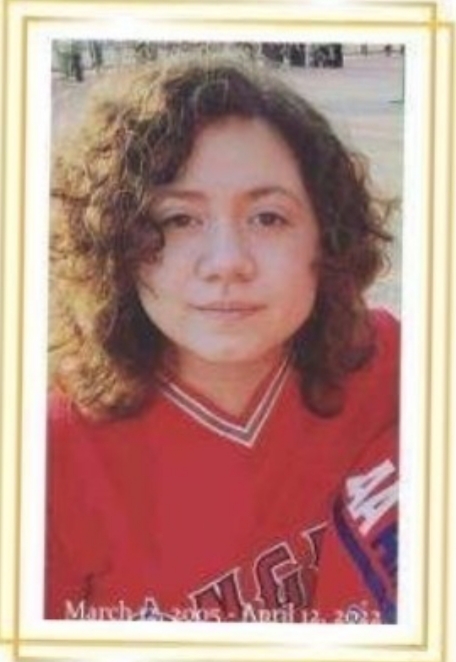 Leyla Sandoval was 17 years old when she passed away on April 12 due to a car accident. She had just transferred to Buena Park High School from another school outside the district. She was a bright student and a great person at heart who cared about others. Leyla was involved in ROTC, CTE, and Ag. We wanted to remember Leyla Sandoval because she was a beloved student, friend, and sister.

We interviewed one of her friends, 16-year-old Emmanuel Rosas. He was 16 years old, and was one of Leyla’s friends who commented on how she was as a person. He mentioned how Leyla was nice, a caring person, and really sweet. The memories they both shared were during break and lunch when they would hang out, walk around talk and go out to get food at times. The pair met at the beginning of the school year because of the ROTC Colonel. Rosas said, “[Colonel] gave me a rifle and made me present in front of the class. Leyla was sitting right in front of me and she was the one guiding me with the rifle,” Emannuel said.

Anna Bloch, a 15-year-old friend of Sandoval said, “She was super sweet, caring, social, and just an amazing person overall. She and I always had the same floral meetings, which is how we first met. After a while, we ended up making a lot of jokes with my friends and we all ended cracking up. We actually found it easy to talk with her; there was no awkward silence or any social limitation.”

Her friends also said that Sandoval had dreams and goals she wanted to pursue after high school. Ver Manolo Velasco commented that “She was chasing to get better grades in all her classes and she planned to go to college to study and be a bioremediation specialist and forensic cleaner.” Bioremediation specialists are those who treat pollutants by mimicking and stimulating nature’s biodegradation, and forensic cleaners are individuals who clean up crime scenes.

Mrs. Schlager, Sandoval’s CTE teacher, commented, “She was well focused and opinionated in a good way. She loved to take people under her wing and help them out with a project or an assignment.” Speaking of fond memories, Mrs. Schlager said, “My favorite memory I have of Lelya was when she would come into class after school because she liked my class enough to come in second period and be in after school, but it was also nice to talk to her along with seeing her do something she loved in this class. I love and want to support her because she had amazing talent and when I found out about what happened I could barely hold it in because I was devastated.”

Sandoval’s geometry teacher, Ms. Urena commented, “She was a quiet student in my class. She was really kind, funny, and usually would ask for help when she needed it, but also sometimes talked to the people around her.” Sandoval often stayed in Ms. Urena’s classroom during break and lunch. “She would stay in my class during lunch and there would be another group of students here as well, but at some point, they ended up talking about video games, art, and movies,” she said. “I remember she went up to me and asked if she could work on the geometry project on her own, but she ended up making a nice video about it. I remember watching it the other day to remember her.”

Senior Master Sergeant Carney was also another one of her teachers, teaching the ROTC class. He said, “She was a good student, well-behaved, a little shy at times, but she was very involved with the things we do in class. I would say a little shy, but she had no problem communicating with teachers and students. Like a lot of my students, I would say just seeing her enjoy the class and seeing her happy is probably the best memory I could have.”

Mr. Worrell, floral design teacher, said, “She was liked by her peers and always brought positive energy to the class. I appreciated how she was involved in multiple programs on this campus, with her being a new student at Buena Park High School this year. I would have told her the same thing I tell all of my students; to continue to have a passion for learning and to work hard at it.”

It’s evident that Sandoval was a great student at Buena Park High School who was loved by her family, friends, and teachers. She brought positive energy throughout her day as she went to her classes. If you need help coping and need to talk to someone, be sure to visit the Coyote Corner.